Archive for the ‘Interviews’ Category

Interview: What Is Music? (UK)

Alex Lynham writes for UK magazine High Voltage and his blog What Is Music?:

Aha! It all comes together, as you see. I had the chance to put some questions to one of the best bands I’ve come across in the last few months, Boston’s RIBS. Over the weekend, vocalist/guitarist Keith and lead guitarist Justin got together and took them on- the results are in, so have a look:

1. What is the band up to now? What are your plans for the future, and is there an album on the horizon?

Keith: Right now we’re coming to grips with the fact that we have too many song ideas and not enough hours in the day. We’re about to release two electronic-y singles, “Cosmos” and “Please Don’t Go”, and we’re also writing our second EP Russian Blood which should be done by early next year.

2. What was the recording process for the EP like?

Justin: All the parts for British Brains were recorded separately and at different times over the course of 2009. We tracked guitars, bass, and vocals in bedrooms and rehearsal spaces, then saved up enough money to spend a day doing drums at a nice studio.

Keith: It’s a WW2 quote from Stalin during the Teheran Conference with Winston Churchill and Teddy Roosevelt. He said the war was being fought with “British brains, American brawn and Russian blood.” [I guess that explains EP2’s name then…]

4. What would you say your main influences are, musical or otherwise? Were there are any bands that have had a particular influence on your sound or your attitude towards your music?

Keith: The influences behind British Brains are fairly straightforward. Mostly rock bands. Smashing Pumpkins, My Bloody Valentine, Our Lady Peace. As a band, though, we’ve got a lot of influences that have yet to show up like David Bowie, The Beatles, The Beach Boys, Fleetwood Mac, Sneaker Pimps, Elliot Smith, M83, Arcade Fire, Black Rebel Motorcycle Club. And more recently Grizzly Bear and Liars.

Outside of music, we take inspiration from anything that makes us feel more alive or draws us in. Christian Bale’s character in American Psycho. [Bassist] Blake [Fusilier] had us read Patti Smith’s new book Just Friends, which is about bohemian culture and her life in NYC during the late 60s and early 70s. And to those who are depressed about the state of music over the last few years… I think we are in the golden age of television. Mad Men, The Wire, Dexter… Amazing things are being done in the TV world. So anyway, the four of us are always analyzing pop culture and art to help us figure out how to implement our ideas–how we can make people feel a certain way with a song, our live set, album artwork, etc.

Justin: Definitely a huge fan of Dexter, but for me a lot of inspiration comes from movies. It’s the culmination of a lot of different things being delivered over different mediums all at once. The aesthetic of the film itself, the film score, acting, story, dialogue, etc. Movies allow me to totally lose myself and exist in a suspended state of reality, even if it’s only for a couple of hours. 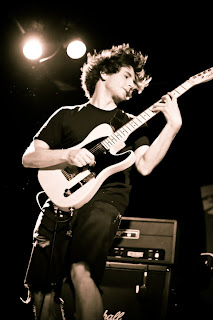 5. You successfully managed to self-generate a lot of buzz through Reddit for your self-released EP; as a result, do you see a record label as still being relevant given that DIY appears to have worked so well for you?

Justin: We’re not waiting on anyone, but we’re keeping our options open.

Keith: Exactly. Artists today don’t need a label to survive, but on the other hand we want to do more than just survive. We’ve got big plans and there’s no way we’re going to be able to pull them off without putting together a great team. So it’s really a question of, do they pay us or do we pay them?

6. What’s your view on downloading? Does it help or hinder bands?

Keith: We have a neutral stance on piracy. We won’t judge you if you download our music. But I don’t know that we could afford to keep going if it weren’t for the incredible support we got from the Reddit users who came out in droves, paying for our EP and sharing it with their friends. It was a humbling experience and we’re incredibly grateful for it.

I think there’s an expectation now that new acts have to give away their music in exchange for the exposure, and eventually that exposure will pay off. A lot of bands think that’s the best way to get their music heard by as many people as possible. But we made a very conscious decision not to release the EP for free, because we don’t want to give people the impression that we don’t want their money, or that we won’t put it to good use. Because we will. And I think in the long run, more people will hear our music and more RIBS material will be released because of all the people that decided to support us early on.

Plus the EP is free to stream on our Bandcamp page (hear.ribstheband.com), so everyone can hear it and share it with their friends that way too. [I’ve included this at the bottom for you, my lovely readers; it’s also on the review page for British Brains- don’t I make this easy?] 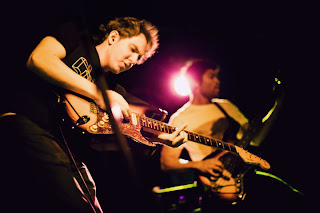 7. What do you prefer: playing live, or on the record?

Justin: Both are very different from one another. While I love recording and exploring what can be done to a song in the recording process, those 40 minutes on stage, when time stops and all you’re doing is just playing, is the most fun I can have. That’s the happiest I could possibly be.

8. Your sound is pretty tech heavy; what’s your favourite bit of kit?

Keith: I have to give a shout out to SoundToys for their Echoboy plugin, which helped create the vocal sound for “Even” and the guitars on “Silencer”. I don’t think either of those songs would’ve been possible without it. I also love my Zvex Box of Rock distortion pedal. Blows me away every time.

Justin: I used my Diezel VH4s amp for the leads on British Brains.

9. How did the band get started in the first place?

Keith: Blake and I grew up together in Atlanta. We started writing together in 2001 and became best friends. Then we had a falling out, stopped talking for a while, and I went to Boston for college. We started talking again, then Blake got stir crazy in Atlanta and transferred to Boston University.

When I first got to music school, I was hearing about some guy named Justin Tolan who was this shred guitar prodigy. Then a few years later we started hanging out in the same circles and I found out he’s actually into a lot of the stuff I’m into. And it turned out he was from Atlanta too.

Then maybe a year later my dad ran into him at a used guitar shop in Atlanta on break from school. Still, nothing came of it. Some time after that, I responded to a ‘band-wanted’ ad he put up around town listing Aphex Twin, Radiohead, and Muse, not knowing who posted it. The moral is, all roads lead to Justin Tolan.

When we first met [drummer] Chris [Oquist], he told us he was playing in a metal band and his favorite artists were The Beatles and Paul Simon. That pretty much sealed the deal.

10. Can you remember the best show you’ve ever played?

Keith: My personal favorite was at this church in Pennsylvania that looked like an empty airplane hangar. It was huge, and we took full advantage of the space. I knocked over the mic stand with my guitar, Justin slammed into me, Blake was throwing stuff… It felt great.

Well, there you have it. Lovely chaps, great music, and we wish them all the success they deserve. Now to start planning the UK tour…. (wishful thinking never hurt anybody.) TA: In truth, there was no pre-conceived reluctance whatsoever. We were just really, really, super happy to be working with Ross Robinson! We had all known and loved Sepultura and other albums he had done. I was well into Korn, Slipknot, At The Drive-In, Glassjaw, etc. In no way would he have made us sound like any of those bands. We had the songs written how we wanted them and we were so lucky to have been given the opportunity.

TA: Yeah man, Manny from Glassjaw came and played bass, Ash, the drummer on the Vex Red album, came over too, and the three of us recorded some incredible songs.