On May 29th, RIBS released their second proper EP Russian Blood to a packed house at TT’s. I followed up with Keith Freund and Chris Oquist to talk about how their music business acumen is affecting this release, their online strategy, the success they’ve had with bandcamp and much more. Importantly, I also learned that they have yet to ever play their own song on Rock Band. If anyone reading this has an XBOX, invite them over to check it out! Get to know some of the minds behind RIBS in the interview below, and listen to Russian Blood in its entirety by streaming the new EP from the bandcamp widget at the very bottom of the post. If you like what you hear, download it from bandcamp or iTunes, or pick up a physical copy at Newbury Comics.

IA: You guys are well versed in music biz know-how. What are you doing to make this release special?

Chris: I honestly think that at this point the question is what our fans are doing to make it special. With British Brains, Reddit gave us a huge head start, but we still existed in a vacuum, more or less. This time around, we post a song on YouTube and we’ve got people commenting on it, people are sharing our Facebook updates with friends, fans write us and suggest places for us to play when we come through their town, people tweet at the Boston Globe thanking them for running a story on us. For a band that’s still completely self-managed, that’s gold – it enables us to do a lot with the very limited resources we have available. Yesterday, we were added to regular rotation on WFNX here in Boston–the station that first played Nirvana and Foster the People. When we posted that news on Facebook, fifty people liked it, shared it, and commented on it in various posts. That helps build momentum, it validates the music, it makes people feel like they’re in on something, and encourages other industry people to take the release and run with it.

IA: You “accidentally” worked on British Brains for 5 Years, falling into the perfectionism trap that so many musicians do. What did that experience teach you about writing and recording timelines? I take it the same process for Russian Blood was a much shorter endeavor.

Keith: If I could go back, I wouldn’t do anything differently with British Brains. It was maddening at times, sure, and we don’t have that kind of luxury anymore, but it was an interesting experience to leave two years between writing sessions, as was the case for some of the songs.

For Russian Blood, the writing process was condensed into two years instead of five, which seeps into the music I think. It’s a little more raw; it has a greater sense of urgency. Some of the songs sound like a race against the clock. Both methods have their place. Maybe we’ll write a double-album in five days next time.

Deadlines can be your friend and they can be your enemy. What we try to do now is divide our deadlines into smaller steps instead of saying “the record is going to be done by MMDDYY” when we haven’t even finalized the track listing yet.

Keith: As far as I know, there’s really no downside to setting a price minimum on Bandcamp and allowing people to pay more. I wouldn’t consider that to be “name your own price” strictly speaking. It’s more like, here’s our price, and you can donate extra if you want to help us a little more. As a buyer of music myself I prefer set prices. I don’t want to have to make that evaluation of “how much is this worth to me?”

All this “what’s the new model?” stuff… free vs name your price vs set price vs subscription…  I think it would be a mistake to tell other artists what they should be doing. Different things work for different types of artists at different times. And another thing to keep in mind: sometimes how you release something becomes negligible past a certain point. Some albums will succeed no matter what and some will fail no matter what. It’s not like The Price Is Right where there’s a car behind door #2 and a bag of rocks behind the others.

With RIBS, we generally make these types of decisions based on what feels right rather than trying to guess which would be more profitable. It seems to lead to good things.

Chris: The value that–and I want to be fair to a lot of music listeners and say most people–the monetary value that most people place on music has decreased dramatically. It’s not a sinister thing–it’s a function of the way people consume music. It’s ubiquitous, it’s everywhere. You can search for a band on YouTube and watch videos for free in seconds, with Spotify you have access to a stunning array of music, in the palm of your hand, at any time. You could be in Earth orbit and decide you want to hear Janos Sebestyen play Bach’s Invention No. 13, and in seconds, you’re off.

And that just means that people don’t frequently come in contact with situations that make them think about what goes into creating music, so little things that remind people that music is what keeps musicians alive are all good. It’s expensive to write an album, it costs a lot of money and time to write and record and put into people’s hands. The Bandcamp thing is great because it’s not intrusive, but it’s a really subtle reminder that there’s value in music, and you can choose how to support its creation. One fan paid over forty dollars for British Brains, and we’ve had people email us and say “Hey RIBS, I pirated British Brains when it came out, and so when you released Russian Blood yesterday I bought both albums legitimately, and here’s some extra money – keep making songs.” 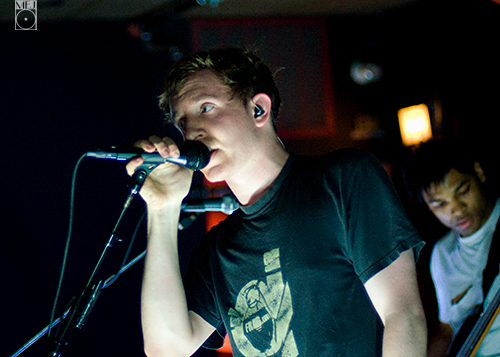 IA: In an interview with the Globe you offered a sentiment that bands spend too much time in search of a silver, online bullet for their music careers. Is RIBS’ online presence more of passive one?

Keith:  It was. Not anymore. Chris might explain this in a different way, but I think our early days of using Facebook centered around me not wanting to annoy or piss people off. That was when we maybe had 500 Facebook fans, a hundred email subscribers, whatever. I wanted to hang on to every last one of them even if it meant only posting once every few months. Now that we have more fans I’ve come to accept that you can’t touch thousands of people without pissing some of them off. So now I go along more with what Chris wants to do in terms of the frequency with which we post things. Because hey, anything is possible – nothing is certain. We might as well have a sense of humor about things, make mistakes, and see what happens. Plus Facebook seems to be getting pretty good at not showing crap posts to people who aren’t interested.

Chris: I think there’s a difference between understanding that there aren’t any shortcuts to success and being passive online. Early on, we were a bit bashful about intruding on people’s news feeds – who wants to get a bunch of self-indulgent stuff from a band? But it seems like the more we share, the more people react (as long as what we’re sharing is cool, and not just “Hey, please like my page.”) Understanding that has given us the confidence to be honest and kind of funny in our emails to fans, in our Facebook posts, on Twitter, and I think that brings fans into our world a little bit, let’s them in on the secret.

IA: Will your digital strategy stay the same during the course of Russian Blood’s promotion or not?

Keith: We’re focusing more on YouTube now. The British Brains/Reddit days were mostly about Bandcamp, unfortunately I didn’t even have the presence of mind to put our songs on there until after all that craziness had passed. I think more people go to YouTube first than anywhere else when they’re looking for music, and it’s also how I see people sharing music the most. Bandcamp is awesome, and we’re still sending people there to buy the EP, but it’s a more solitary experience when you listen to a band on Bandcamp. I think especially in our case there’s something to be said for solitary listening, but I think it’s good to have both. On YouTube people can interact with each other, give us feedback, see how other people are reacting, and get pissed off because we don’t have enough views on such and such a song. As a music fanboy myself, I know what that’s like. When a band I love doesn’t have the recognition I feel they deserve, I start freaking out and telling anyone and everyone.

IA: I saw “Brains Out” made it onto Rockband. How did you hook that up? Have you seen any promotional benefits?

Keith: Actually a Redditor hooked that one up. He works for a company that puts song in the game. We’ve definitely gotten some new fans, but we’re less connected to them (there’s no way to link to your band in Rock Band so far as I know) so we only see evidence of them here and there if they send us an email or leave a comment on YouTube. We’ve also made a little money from it. But mainly it just makes us feel way cooler than we actually are. And our fans loved it too, at the time it was our most popular Facebook post we ever had.

IA: Are you good at your songs on XBOX?

Keith: I don’t think any of us have played it yet. Can we come over?

IA: Will we see a RIBS tour anytime soon? I think a summer tour called The American Brawn Tour would sell really well in certain parts of the country…