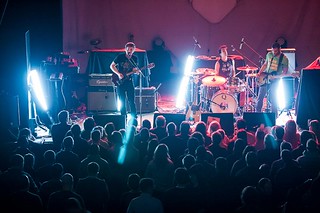 Tour was a whirlwind. Thanks to The Joy Formidable and crew for treating us like family and showing us an incredible time on the road. We’re grateful for all the new friends, fans, and memories we’ve made along the way and can’t wait to get back out again to meet even more of you. Until then… ** with The Joy Formidable An East Coast Run for RIBS

This Thursday night in Boston you can see a band that tick all these boxes; a band that knows the difference between performing and merely playing their songs, musicians that really commit to every beat of the drum and pluck of the string, and songs with hooks you’ll be singing after the set is over. Since their incendiary (and insanely loud) headline set at the RSL four-year anniversary party a few months ago, RIBS have been busy plotting their next musical take-over. It comes in the form of an East coast tour, and, since we can say they are ours here in Boston before they are anyone else’s, where better to kick that off than at Great Scott.

RIBS are an unashamedly heavy band. In a sea of indie, folk and Americana, they play music that shakes through your ribcage (no pun intended). I’ve read of various more or less strange comparisons (Joy Division?!) – perhaps Deftones is the best parallel with the operatic scale of their semi-metal sound. Either way though, the buzz about his band is worthy, and you can give them a great tour send off this week if you find yourself in the right place at the right time. The rest of the dates on the East Coast spin, follow…

We’re hitting the road in May, and there’s nothing you can do to stop us.* Here are the tentative dates and cities:

Shoot us an email if you know of people who can help promote a show in one of these cities, best places to crash/get inexpensive food, etc. – [email protected]

*Does not apply to any tsunamis, earthquakes, or other natural disasters who may be reading this.