The Boston Phoenix Makes “Kiss” MP3 of the Week

It feels like forever since Boston rock band RIBS released the one-two sonic punch of their Locrian Singles. That was January 2011, and since then, the pulsating quartet has been hard at work meticulously crafting their EP follow-up, Russian Blood.

Primed for explosion, the first single, “Kiss,” was released today via the promo video above, and it’s also available as a free download. The track is a slow-burning sledgehammer of a tune, taking RIBS’ murky, underwater rock sound and adding a welcome heaviness the band hinted at on previous standouts like “Brains Out” and“Please Don’t Go.”

But “Kiss” is just a taste — the entire Russian Blood record is a potent post-modern mix of layered riffs, space-shot hooks, and dizzying atmospheric sounds; it’s music for a different mindset and one that should launch the band into the national realm just as we predicted back in our Class of 2011 feature around the timeLocrian dropped.

Grab the mp3 below, and tune in to Boston Accents on Sunday, May 20 as we’ll premiere the entire Russian Blood EP and have the dapper gentlemen of RIBS hanging out on-air in the WFNX studio. That Friday, May 25, they’ll drop the record at T.T. The Bear’s Place in Cambridge on a pretty killer bill with Autochrome, the Suicide Dolls and Yoga Girls, and then RIBS head down to New York City the following night for a release party in the Dirty Apple alongside Viva Viva and Frank Smith at Brooklyn’s Public Assembly.

Let’s all make out.

From the very first riff of RIBS’s rumbling new single “Kiss,” it doesn’t take long for the sonic seismograph to start tracing a zigzag across your headspace. The quartet’s first release since the one-two suckerpunch of last January’s atmospheric Locrian Singles, “Kiss” is a pure growler, a sledgehammer of a tune that wedges its way into your ears and sprawls across four eerie minutes, eventually striking a low-down choral groove that only serves to momentarily stop the song’s pounding ritual. “Kiss” is the fitting first-strike single off RIBS’ new Russian Blood EP — a textured, modern hard-rock record that’s dark, meticulous, and crafted with a gunslinger’s precision. We rarely feel earthquakes here in Boston – 08.23.11, never forget – but RIBS will shake up T. T. The Bear’s next Friday, May 25, as they drip Russian Blood on a sterling rock bill alongside Connecticut rabble-rousers the Suicide Dolls and the mysterious Yoga Girls.

Tune in to Boston Accents this Sunday at 8 pm when RIBS crash the WFNX studio in Lynn.

Whereas most bands nurse hangovers on Saturday mornings, the dudes in RIBS spent the one before their tour kickoff party at Home Depot, wandering the tall aisles of suburban fix-it wonderland in search of multi-colored floodlights and thin, four-foot-long fluorescent bulbs.

The result of this shopping spree was a dizzying display of radiant visuals May 5 at Great Scott, with RIBS kicking off a 10-date East Coast trek on Cinco de Mayo. Aside from the constant threat of Patrón shots at the bar, the night featured nary a nod to the feels-kinda-racist Mexican holiday. I mean, who has time for faux sombreros and worms tickling the throats of drunken Allstonian college students when there’s a debut tour to launch?

Since being featured in our Class of 2011 local-music package in January, RIBS have established themselves as a powerful force on the Boston music circuit, paving an uneasy middle ground between our indie and metal scenes through sharp, pulsating electo-industrial rips that make a greater impact on stage. Awash in red, blue, and glaring hospital-room whites that visually sterilized the Great Scott crowd (in perhaps an unflattering glare), firecracker tracks “Please Don’t Go” and “Even” screamed out from the shadows like the soundtrack to a hazy Ketamine trip at the late-night planetarium.

The whole experience was almost too much for a mid-sized rock club like Great Scott, with rows of bright lights stretching along the walls and ceiling back toward the soundbooth and bar area. New enough to be nominated for Best New Act in this year’s Best Music Poll, RIBS are just screaming for larger stages and higher ceilings. Currently lost somewhere in the Carolinas shining a blinding strobe on Southern showgoers, they’re a band worth getting excited about.

Upon returning home next week, RIBS hope to start recording Russian Blood, the follow-up to January’s Locrian Singles. The glare promises to shine even brighter.

Fletcher of Boston’s WFNX and Boston Phoenix music editor Michael Marotta talk RIBS, give away a bunch of stuff on-air, and preview our upcoming 5/5 show at Great Scott. They also promise to buy you all screwdrivers. 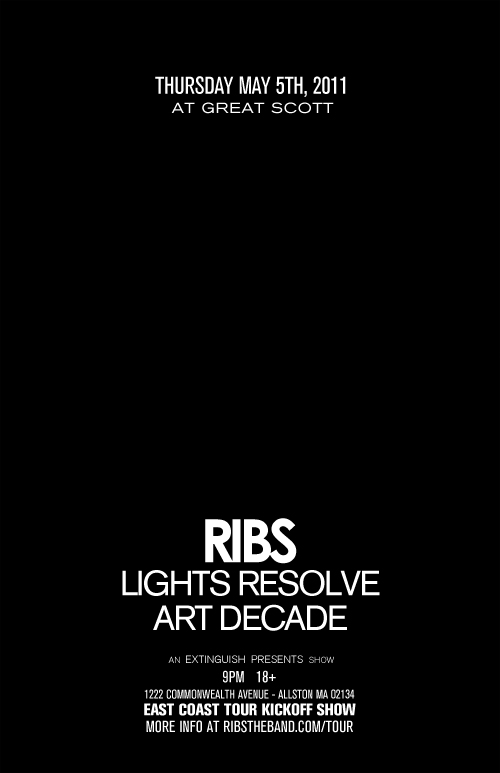 RIBS Shout Out in Boston Phoenix: “Boston Rock’s 2010 In Review”